An important Safavid text of the masāʾil genre

I have previously written a blog post on the significance of the Safavid thinker Mullā Shamsā Gīlānī (d. c. 1064/1654), student of Mīr Dāmād (d. 1040/1631) and friend of Mullā Ṣadrā (d. 1045/1636). One of the works of his that is worth examining is his Investigations into the States of Beings, recently published by Mazda in California. I have previously mentioned it as forthcoming. I will later upload my introduction to it onto academia.edu as well. 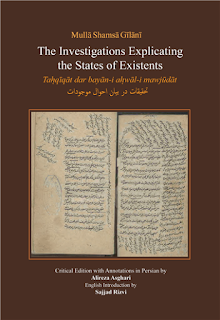 You can find details about this from the Mazda website here. I also wrote the introduction which attempted to locate it within the philosophical corpora of the Safavid period. There is a slightly earlier edition of this text published by the Bunyād-e Mullā Ṣadrā based on the same collection of manuscripts although this edition includes one codex from Āstān-i quds-i rażavī in Mashhad. The Bunyād edition focuses on what distinguishes it from Mullā Ṣadrā and divides up the text into sections such as ontology, eschatology, the properties of bodies (physics), the problem of ontology primacy in contingents, and a final brief section on philosophical theology. It also names 18 questions - the Mazda edition names 20.

There are the following:
1) an epistemological preliminary on the distinction between self-evidence and acquired knowledge
2) on the nature of perception
3) on the intensionality of being
4) on the concept of being (being qua being or wujūd muṭlaq)
5) on the nature of causality - the rehearsal of the Avicennian proof for the existence of God
6) on the existence-essence distinction in contingents
7) on the simplicity of God
8) a critique of the notion of mental existence (which is unusual as the Avicennian tradition usually embraces the notion)
9) Fārābī and Mīr Dāmād on the being of contingents as beings of reason
10) on being super-added to essence in the mind
11) being is ontologically prior in contingents but as a conceptual priority
12) on the soul as separable substance and distinct from the body
13) on Avicenna's suspended person thought experiment
14) on the possibility of the return of the non-existent
15) on the impossibility of atomism
16) on the impossibility of infinite regress in matter
17) on the impossibility of the actual infinite
18) on contingent beings as beings of reason - another approach
19) on the denial that being is a universal
20) on the definition of a science

The Mazda edition is more faithful to the approach of Mullā Shamsā since it shows his adherence to the Mīr Dāmād reading of Avicenna in which the focus is upon being of contingents as purely posited in the mind and conceptually prior in the mind to essences. However, like Mīr Dāmād, he suggests that essences are produced by God in the causal chain of emanation and it is essences that are in extra-mental reality since only God truly is worthy of the title 'being'. So in terms of the formulations of Mullā Ṣadrā, only God is worthy of 'being', contingents possess the ontological priority of essence (aṣālat al-māhīya) in extra-mental reality and it is essences that are produced by God in the chain of emanation (majʿūlīyat al-māhīya). Mullā Ṣadrā compensates by going the opposite direction in asserting that only being is emanated and essences do not exist in extra-mental reality at all, and that the relationship between God and the cosmos through being is expressed in his principle of the simple reality encompassing all things (basīṭu l-ḥaqīqa kullu l-ashyāʾ).

As a witness to this particular reading of Avicenna that redefined the Avicennian tradition in the Safavid period and continued to have an impact until the Qajar period, this work is an essential read. One sees him debating with issues in the Sadrian reading of Avicenna. It also shows him responding to key questions - and in that way it resembles the Taʿlīqāt and Mubāḥathāt of Avicenna -  and also deeply engaging with the Avicennian traditions not only the works of Avicenna himself but also with his commentators such as Ṭūsī (d. 674/1274) through his commentary on al-Ishārāt wa-l-tanbīhāt and his Tajrīd al-iʿtiqād and subsequent glossators such as al-ʿAllāma al-Ḥillī (d. 725/1325), al-Sharīf al-Jurjānī (d. 816/1414), and Jalāl al-Dīn Davānī (d. 908/1502). Thus we can see how the Mīr Dāmād and Mullā Ṣadrā readings of Avicenna competed for supremacy in the later Safavid period and beyond, with the latter emerging as victorious by the time of Mahdī Narāqī (d. 1795) and ʿAlī Nūrī (d. 1831).

Posted by Mulla Sadra at 03:53 No comments: Links to this post

The Avicennian Tradition - the Iranian and Indian Legacies in Metaphysics

The Avicennian Tradition:
Here is my conceptualisation of what happens to the Avicennian tradition mediated by the commentaries traditions on his works and works directly influenced by him in the later post-classical period primarily in Iran and North India. It has been prepared for my talk later this week in Rome on the later Avicennian period and the role of Mahdī Narāqī (d. 1795) as glossator and critic of Mullā Ṣadrā (d. 1045/1636). The focus is on metaphysics. I should clarify what this is not:

1) It is not a comprehensive account of texts, traditions and contexts. For example, I cite those glosses that I think are particularly significant in the process of the growth of lemmata on particular issues.

2) It does not consider rasāʾil. We know that certain issues took on a life and genre of their own; for example, Fīrūzeh Sāʿatčīān has shown how the Iṯbāt al-wāǧib genre begins with Avicenna's famous proof for the existence of God by radical contingency but goes far beyond. There are particular works in logic such as the Liar's Paradox and types of related paradoxes. There are paradoxes in physics and metaphysics such as the nature of incumbency, concomitance, the simplicity of God, and the semantics of modulation among others. Sometimes the relationship between these paradoxes for teaching purposes is clear through the manuscript tradition as they are collected with the base texts in a single codex. John Walbridge has been studying these texts.

3) I do not consider the Ottoman contexts or the Central Asian. The former is increasingly well treated by Turkish scholars and those associated with the Nazariyat journal in particular. Khaled el-Rouayheb's recent work on the 17th century also deals with the Ottoman and North African contexts. It would be great if those working on Central Asia would also feed into this process of producing a more connected intellectual history.

4) These are not the only works of Avicenna on which there are commentaries - the other works that come to mind are al-Naǧāt (on which there is a famous commentary by the little known al-Isfarāyinī) and ʿUyūn al-ḥikma (glossed by Faḫr al-Dīn al-Rāzī). Similarly while the later traditions often cited the Kitāb al-taḥṣīl of Bahmanyār (d. 458/1067) and al-Mabāḥiṯ al-mašriqīya as exemplars of Avicennian positions (as Mullā Ṣadrā does to cite one case), the absence of commentary traditions on them lead me to set them aside for this exercise. In fact the whole of the later Rāzian tradition is missing. One of the points that I am making is that Rāzian and Ṭusīan readings of Avicenna are replaced by Mīr Dāmād and Mullā Ṣadrā in the Safavid period and they impact further East as well.

I should also point out that Asad Ahmed's conceptualisation of the later traditions of maʿqūlāt as 'palimpsests of themselves' strikes me as being rather apposite; texts develop as sets of lemmata that seek their completion in commentary and hence grow through exposition and excavation of the pre-history. In that sense we are not talking about inter-textualities but the growth of texts through their opening forth such that a voice emerges that defines a text. A commentary that is too clear thus represents a closure and accounts for the point at which a particular tradition comes to an end. Of course, this begs the question about Avicenna's own texts: did he not consider them to be the final word? Perhaps he did but as we see from the Taʿlīqāt and Mubāḥaṯāt genres, his students still felt that there were masāʾil that remains and required comment. In fact in that sense the šukūk and masāʾil genres of sets of lemmata go back to those students' questions and Avicenna's responsa.

Finally, although I focus on metaphysics, the later maʿqūlāt have a certain holistic nature where the issues at stake are more important and hence commentators feel they are open to connect, to excavate, to draw comparisons with discussions in kalām texts, in logical ones and even in various types of exegesis. For example, much of the umūr ʿāmma discussions in Mīr Zāhid on the Šarḥ al-mawāqif intersects with the logical concerns of the commentaries on the Sullam of Bihārī. This does not mean that generic boundaries are not meaningful - after all authors often make a distinction between the usage of terminology according to their technical assignation in their particular sciences. But rather it suggests that the core unit of meaning and debate was the masʾala which often worked across sciences and genres of writing and provided us with such key data for the ways in which texts are studied and contexts and networks understood. Networks are then not so much the vehicle for the dissemination and transmission of texts as codices but as orthographical witnesses to the concerns of those involved in the debates themselves and their compositions.

So here are the texts and observations:

Posted by Mulla Sadra at 04:18 No comments: Links to this post