The life of the mind in contemporary Iran

Read alongside the recent interventions in modern Iranian intellectual history by Cyrus Schayegh, Alireza Doostdar on the metaphysical and the occult, and Ata Anzali on the rise of the category of the 'mystical' (which I had the pleasure of reading for the press and endorsing in a blurb), Hossein Kamaly's new book God and Man in Tehran represents a major event that should be and can be read profitably by those wishing to make sense of the intellectual roots of modern Iran as well as working through the dynamics and complexities of the Safavid period. 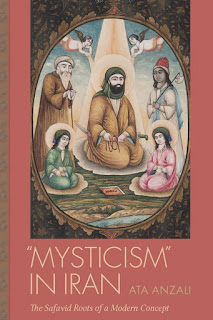 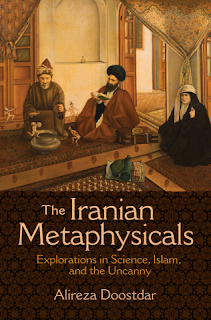 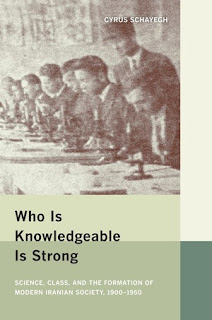 What is at stake is making sense of the visions of theology in the modern period, along the spectrum from atheologies to the most forthright political theology of absolutist notions of sovereignty. 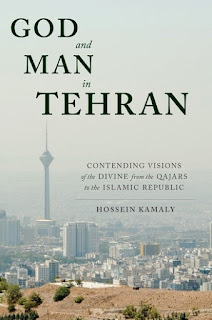 In seven chapters, Kamaly takes us along this spectrum from the Qajar period to revolutionary Iran, considering the impact of the sciences upon 'mediatory theology', the teaching of philosophy within and without the madraseh, the transformations in Sufism (both of the more official orders and informal networks and apparatuses), and a whole range of reformist thought within Islam. Along this journey, Kamaly introduces many an intellectual to us, unknown on the whole expect to those who read the sources and understand the more intellectual milieu in Persian well.

That it is centred on Tehran is significant, because it is the city and the centre that since the Qajar period has taken over from Isfahan as the intellectual core of Iran and the central place in Iranian intellectual history. Chapter 3, although not actually on Khomeini, nevertheless helps us to understand Khomeini far better than much of what is published on him. Chapter 4 explains the lasting allure of uṣūlī Shiʿism. Chapter 5 analyses the reasons why madraseh philosophy embraced Mullā Ṣadrā and promoted his thought. In that chapter, Hādī Najmābādī (d. 1902) is discussed, a figure who would be worth a dissertation - perhaps alongside his contemporary, a real mover and shaker of the seminary (and a leading beneficiary of financial corruption within it) Āqā Najafī. This chapter also shows some of the keys links between the seminary and the study of philosophy in the new Tehran University (and it is no accident that the old Sepahsalar madraseh was at least for a time the theology and philosophy faculty of the new university). Chapter 6 deals with the Sufis orders and ʿerfān - the only element that could take the argument further would be the ways in which the latter is contested in post-revolutionary Iran in the public and private spheres associated with the legacies of Ṭabāṭabāʾī and others in his circle.

The final chapter hints at the links between skepticism and the reformists and winks at the older tradition of the rind in Ḥāfeẓ - but it is far too short. If it is a conclusion, one would want more. The book on the whole is a series of wonderful vignettes that in effect table a whole gamut of research questions that eager graduate students should take forward. This does not detract from its value as a snapshot of the various modes of understanding 'theologies' in modern Iran centred on Tehran. As a work it is also an expression of the culture of modern Tehran, at once at home with poetry and the literary greats as well as the philosophy and theology of Persian Islam.

Posted by Mulla Sadra at 16:09 No comments: Links to this post

Whatever happened to the school of Isfahan?

I do not normally like using the concept of the school of Isfahan, not least because as I have argued in my entry on the subject in the Encyclopaedia Iranica there was no such thing. However, the question of what happened to the study of philosophy in Isfahan after the supposed persecution of the late Safavid period and then the Afghan sack and occupation remains worthy of study, especially as many including myself have written about the revival of the study of philosophy in Qajar Iran with Mullā ʿAlī Nūrī (d. 1831), as I have discussed in a forthcoming article in a volume on Qajar philosophy edited by Reza Pourjavady, and with Mullā Hādī Sabzavārī (d. 1873), as I discussed in an article in Iranian Studies that is ultimately based on research I did over two decades ago.

I attempt to fill in some of this gap in a new article that is out in a volume entitled Crisis, Collapse, Militarism & Civil War: The History & Historiography of 18th Century Iran, edited by my friend and colleague Michael Axworthy. 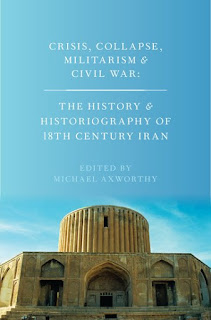 In this piece, I argue that this period, far from being devoid of philosophical inquiry and study, was flush with new centres for its study and new tendencies, perhaps not the best philosophers but ones who were critical with respect to the work of Mullā Ṣadrā. It took most of the century for people to contest his key metaphysical doctrines of the ontological priority of existence in reality (aṣālat al-wujūd), of the notion of flux in existence through the idea of motion in the category of substance (ḥaraka jawharīya), and the attempt to reconcile unity and multiplicity through the dynamic idea of the modulation of existence (tashkīk al-wujūd).

Other insights from the study of the period include:
1) The Avicennian school was one that took on the reading of Mīr Dāmād (d. 1631), such that his doctrine of perpetual creation (ḥudūth dahrī) became the dominant Avicennian approach to the question of the incipience of the cosmos.

2) The interaction of Sufi metaphysics, especially the monism of the school of Ibn ʿArabī, and philosophy was creative: not only was waḥdat al-wujūd one of the most contested doctrines in the period, but the debates on the meaning of 'absolute existence' (wujūd muṭlaq) and the semantic range of existence (wujūd) continued into the modern period and extended the earlier debates that at least in their nascent form took place between Ṣadr al-Dīn al-Qūnawī and Naṣīr al-Dīn al-Ṭūsī in the 13th century.

3) The shrine cities of Iraq were major centres for philosophical and mystical speculation - that may surprise those familiar with their more recent intellectual history. A fuller study of philosophy and mysticism in the shrine cities in the Safavid period and beyond is a clear desideratum and would make an excellent topic of research.

4) The vogue of studying philosophy - or claiming to study and teach the Metaphysics of Avicenna for example of which there are at least 12 major sets of marginalia in the late 17th and 18th centuries - continued uncontested and unhindered and a further study of the memorials of ʿulema confirms that.

5) Perhaps the thinkers of this period were not major ones who would necessarily enter into the canon of philosophy. Nevertheless, they were the ones who debated Avicenna and Mullā Ṣadrā and played a key role in producing the modern hegemony of Mullā Ṣadrā, about whom Hossein Kamaly argues in his recent book (about which more later) that it was MS's thought that was instrumentalised by philosophers and theologians as a defensible form of rational theology in the favour of the criticism of Christian missionaries and others in the intellectually divisive Qajar period - as Kamaly mentions (as I do in my Nūrī article forthcoming), Nūrī in his refutation of Henry Martyn (entitled significantly Ḥujjat al-Islām) makes much of the superior rationality of Islam with respect to the philosophical frailties of Christian missionaries.

Posted by Mulla Sadra at 15:08 No comments: Links to this post